The striking grey stallion Livello rose to meteoric fame on the international show jumping circuit in 2009.

Livello won the Falsterbo nations cup as well as the grand prix held at the indoor horse show in Kiel. The greatest achievement during his career was a much noticed 4th place at the Windsor European show jumping championships under his Irish rider Cameron Hanley.

At the beginning of his career successfully shown in young jumper classes, his sire Limbus also qualified for the Warendorf Bundeschampionat and finished 3rd at the Rostock Grand Prix already at the age of eight. Unfortunately, an injury put an end to his competition career. As a breeding stallion he has produced six licensed sons in the Holsteiner breeding programme. One of them, reserve champion stallion Lejano, was the top selling lot of the 2006 Neumünster auction and sold to France at 250.000 euros. Several show jumping offspring in competition confirm Limbus’ genetic quality.

One example is Lamarque which comes from Cento’s mare family. He won the 7-year-old show jumper final at Zangersheide and thus the world young horse championship. The female line 776 is currently one of the Holsteiner breeding programme’s largest mare families. Zocka by Ahorn was bred by the highly succesful Uwe Bahlmann of Moorhusen, who sold Zocka as young filly. At the stable of the horse breeding Tolle family of Weitewelt/Seedorf, she became the foundation mare of a successful dam line.
Livello’s 2nd dam, Biserta, is also dam to Classic, a successful sport horse shown by Werner Peters, and to the licensed stallions Calvados I and Calvados II.

Livello was licensed for breeding at Neumünster in 2001 and was then leased by Radegast state stud. He competed at the Warendorf Bundeschampionat at 6-year-old, was then purchased by Sevil Sabanci and has since been produced to international level. Since summer 2012, Livello has been successfully shown at international level by Sweden’s Angelica Augustsson.

Numerous offspring from the time he was used as a breeding stallion in Saxony are already successfully shown in jumping competitions at S level. It is a most remarkable fact that 50 % of his sport horse offspring boast show jumping results at S level. 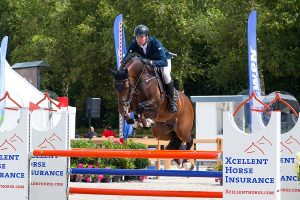 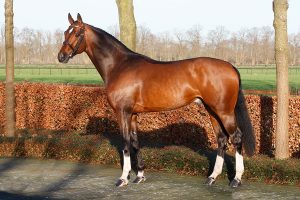