Nine other Dinken foals qualified for the breeding districts’ foal championships. His foal evaluation based estimated breeding value is 131 points.

He embodied perfect type and great athleticism when presented at Neumünster. Already his expression as a very modern young stallion was in a class of its own. This stallion boasts an ideal frame and perfectly constructed top line with a powerful back and very good proportions. His legs are very correct and in very good proportion to his body. His basic gaits are excellent throughout and highlight the energy of this athlete who demonstrates his full class particularly when jumping. This Diarado son can be rated as an exceptional talent, as well.

Dinken performed impressively during the 30 day test. His jumping ability was judged at 9.0 and his jumping breeding value was estimated at 134 points.

At 10 years old, his sire Diarado is still considered an exceptional stallion. Dinken’s dam Inken has successfully competed at international level under Peter Wylde. At 3 years old, she won champion mare of the breeding district North Frisia. She has stamped her son with regard to type, structure and unlimited willingness to perform.

The reserve champion of the VTV/R+V Holsteiner foal championship in Bad Segeberg was by Dinken out of a dam by Cash and Carry-La Zarras. 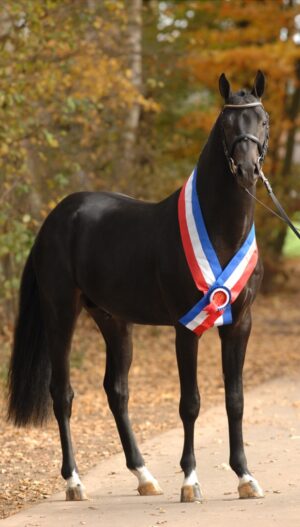