De Niro is The World #1 Dressage Stallion. He is an exceptional stallion of superlative type and performance.

De Niro, 2008 Hanoverian Stallion of the Year, is referred to as “the embodiment of the Hanoverian stallion”. He is a wonderful combination of the best bloodlines of Oldenburg and Trakehner, with a dash of Thoroughbred, insuring success as a sire of noble sport horses.

Since a fantastic start to his career, De Niro has become a legend as a dressage sire, and he has been very successful in sport himself.

De Niro has over 85 licensed stallions in his peering career. His offspring are sought after worldwide and successful at all dressage courses. 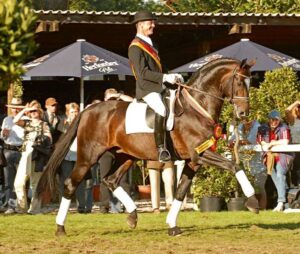